I just couldn't help it.

It is February and the temptation to start planting some seeds is very great. I've been holding off and holding off but today I succumbed. I wasn't going to but then my father told me that he had planted a few and that was enough to break my will.

I didn't plant many (compared with the hundreds of seeds I will be planting this year) but I have been itching to use my new electric propagator (Christmas present) so I chose some of the seeds that suggest January-March as the sowing time. I will have an awful lot of seeds to sow come March so decided it would be good to get a few under way to lighten the load (see how I justify it). 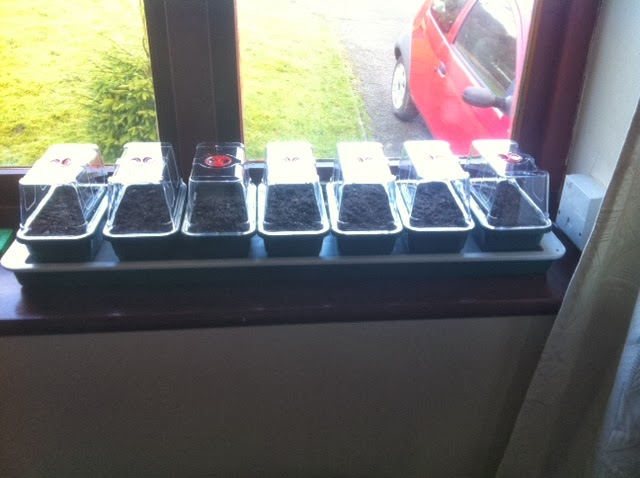 Sitting on my bedroom windowsill.

It's a dinky little thing and costs a tiny amount to run as its actual heat is so tiny, it barely even gets warm to the touch, the seven little chambers are a good size to get a decent batch of seeds in.

I have sown geums, chrysanthemums, echinacea,  a couple of free varieties of sweet peas, digitalis and one other thing which I have forgotten already. Once they have germinated and grown a bit I hope to transplant them freeing up the propagator for the next batch in a few weeks.

Maybe I am too early, who knows, who cares. It brought me a bit of Wintry pleasure for a Saturday afternoon and that is worth plenty.
Posted by DH at 12:10