Round up of the year

I have never gone in for New Year in the least. It is my mothers birthday today and, as a family, we always celebrated that rather than the date change. It is many years, I have to admit, since I have even stayed up until midnight, much more likely to be found tucked up in bed like a chaste old maid. So no doubt this year will be no different.
I also don't tend to go in for things like new resolutions. I have always believed that if you want to change something you just start immediately, there is no point in imbuing the date with a significance that it is going to help. Whatever works for you I suppose. I changed my life by simply making a decision and sticking to it, which had nothing to do with a new year.

Much more interesting to me is spending just a few moments reflecting on the year that has been, the highs and lows, the changes, the achievements. There have been changes in my attitude towards where I live. The first year I was here was about making my new house habitable. This year has been about making it my home. There have been disasters, a foot through my bath meant I was without a bath for over 6 months, but with a (hell of a lot of) effort, I have now a completed bathroom that I am proud of as well as new skills learnt in doing this myself. As I showed in my last post my garden has really come to something lovely this year too. That aside, I have not really done any more work on the house and I feel it is just about finished (or as finished as it can be on my budget). So I have used the time to fully settle in here and put down roots. Long, permanent roots.

Of course putting down roots has meant that there have been struggles in other ways. Leaving for months at a time for work has become a strain this year and I realised something very important: that although I had changed my life and moved to the other side of the country I had not committed fully to the change and had left my working life in the South. Well, of course it was slightly more complicated than that but I found the drag of packing a suitcase for 8 weeks at a time away from home in a place I didn't want to be, hours of driving and a whole summer away from home, is not the way I want to be so this year has brought a massive attitude change with all of that. Now I have fully committed to a life here I have no regrets, no doubts, nothing negative. Well that has to be worth plenty.

There have been ups and downs, new friends made, others lost. I have blogged (all be it sporadically at times) and lots of you have followed the journey. Some of you have gone beyond that and made the effort to check that I am alright at times of silence (you know who you are) and every one of my followers is appreciated.

I think it is worth spending a few minutes reflecting on the year and looking forward to what the next will bring and I wish you all joy and luck over the next 12 months.
Posted by DH at 00:37 22 comments:

Email ThisBlogThis!Share to TwitterShare to FacebookShare to Pinterest
Labels: about me, new area

As the beginning of next year approaches I find my mind turning to the garden again. It appears that not a lot is happening  out there at the moment but there is a lot of promise of things to come. I squelched on down to the greenhouse this morning to grab a spade as I had a tiny camellia and a rose that wanted to go in. Even though it was gently raining, the wind has died down and it was a pleasure to be outside again and to soak up the inspiration I always get from being in the garden. Somehow it fuels my imagination and I came in all excited about the prospect of what I will grow next year.
I am pretty organised with my seeds (well I am a pretty organised man in general but I take it to extreme with my seeds) and as it happens I still have a lot of half packets all of which have best before dates on them for 2014 and a few that I saved from plants this year. That means I may as well plant every single seed and see what happens.
I then made myself a hot chocolate and had a happy couple of hours going through gardening catalogues indulging in a bit of day dreaming what I could do. I chose 10 new sorts of flowers I want to try (I don't need any new veg seeds this year as I have plenty) as Mr Fothergills has a buy 4 get a 5th free on all seed packets, plus £5 off orders at the moment. It meant that I got 10 pack of seeds for just £12 which is a bit of a bargain. Probably means I will have way too many plants, but I will enjoy it all thoroughly. I have bought Echinacia (so far I have had zero success with this), Chrysanthemum Snowland, Ageratum Red Sea, Morning Glory heavenly blue, Cornflower Blue Ball, Hollyhock Giant, Campanula, Geums and some Rudbeckia. The tax man has just sent me a substantial refund as I paid him far too much money last year, so I thought the least I could treat myself to was some seeds. My brother gave me the most wonderful Christmas present too this year: an electric heated propagator so I am very excited to try this out in a few months.
Now I will have the fun, over the next few weeks, of deciding where I will put the new plants, I will change my mind a dozen times and in the end they will probably go in new spots, but it is such fun experimenting. My brand new bed (the largest border in the garden so far) is, at the moment a quagmire of clay and manure with a few new perennials in there (and a small ornamental cherry tree) and so much of these new plants will be going in here. I will do more sweet peas this year as they are heavenly both in sight and smell, but I will choose these seeds another time.

My garden has gone from this: 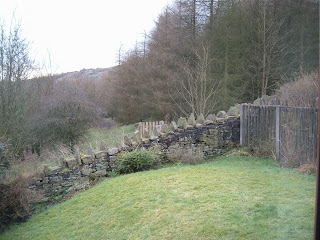 to this, in just two years: 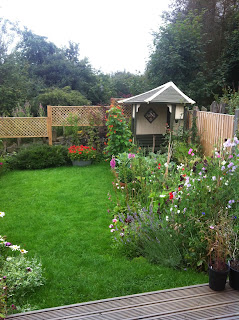 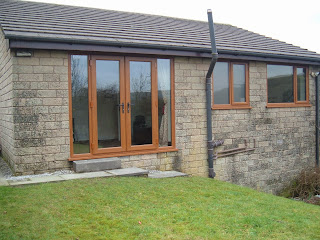 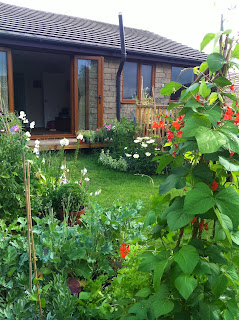 Email ThisBlogThis!Share to TwitterShare to FacebookShare to Pinterest
Labels: gardening.

Merry Christmas to everyone. 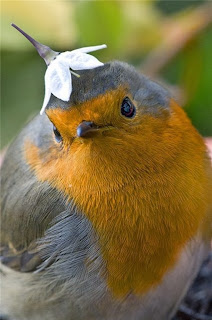 I wish all my readers a peaceful Christmas away from the hectic rush that most people seem to experience.
Thank you all for reading over the year, thank you too for all your comments and emails, they mean a lot and the blog wouldn't be here without you all. I have another big year of change ahead and I look forward to sharing that with you.
Merry Christmas.
xx

When I labelled my last post title as a date it is a stark reminder that 2 weeks has passed since my last entry! Sorry. All is well. After my nasty bug I returned with from London (laid me out for about a week actually) I'm now fighting fit. I have been preparing for winter which doesn't seem to have hit with full (or indeed any) force yet. I spent a few days putting the garden to bed as it were. I have cut things back, laid some mulch and manured some beds. I have spent many an unhappy hour picking cat poo out of the new flower bed (I really love cats but truly this does try my patience) but my favourite job of the last week was to do out the greenhouse. I emptied it, washed a lot of the pots and put them back in good order. I have enough pots to last my a lifetime quite honestly - it is funny how quickly a stock builds up. It got me very excited for next year and the gardening I will do. As I will be away from home less (if at all) I will be able to make better use of the greenhouse this year and with any luck some of my veg from seed will do better. So far my green fingers have only displayed their hue when dealing with flowers, my veg has been a disaster over the last couple of years. Even my leeks which were doing so well, succumbed. Here's me thinking that they could be left out for as long as you want (I'm sure I read that somewhere) and what do I find when I come to use them? slimy leeks. If the weather is okay this week my final garden job of the year will be to clear the raised bed ready for next year. Over Christmas I will have the pleasure of reading through garden seed brochures and decide what I want to try next year. Most of my old seed packets have dregs in that are so old that I doubt they would germinate now so it is time for some new ones. The anticipation is great.
Looks like it will be a sunny day.

I am back from my last trip to London. I ended up travelling home through the night on Friday rather than staying over which meant that I didn't get in until 3am. Seem to have a sore throat and slight temperature now so looks like some nasty germs from the Capital got me while I was there.
Anyway, London is properly part of my past now.

Thank you all so much for so many positive and helpful comments after my last post, it is very nice to have your support and the advice that some of you gave is great and much appreciated.

Anyway, after a week of concentrating on 'important' things and working in London, yesterday I wanted to relax and do things I enjoyed which, of course, meant an afternoon in the garden - my sanctuary. We seem to have good weather right now, even though December is here, clear skies and sunshine up here in the Pennine hills.
After digging out the large new flower bed a fortnight ago I ended up with a lot of large rocks, as I always do and in the ultimate in recycling I decided to turn them into stepping stones. I have been meaning to get stepping stones in for ages, but at about £5 a stone in my local garden centre I have not done it. Perfect solution, free stones, so now I can get from the house to the corner covered bench without stepping on the grass (which is squelchy and muddy and terrible right now). 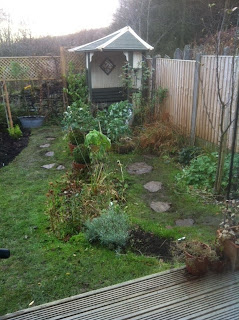 I have dug them in and hopefully I will still be able to mow over them easily as they are slightly lower than the ground.

Well it was an enjoyable and rather easy (and free) job and with luck my lawn might begin to improve as I can avoid stepping on it quite so much in the muddy seasons.
Posted by DH at 03:24 10 comments: