That is: first garden update with photos!

If I wait for the weather to become nice then I will probably be waiting for months, so this weekend I got out there and did some work.
As I mentioned, in the sales I bought a miniature rhododendron and an azalea. Now my soil is fairly acidic, which these plants love, but no harm in helping them along, so I dug a whole and filled it with some ericaceous compost before putting in the rhododendron. I decided to keep the azalea in a pot for now, because I can't quite decide where it will go. It will be happy enough in a pot for a while. 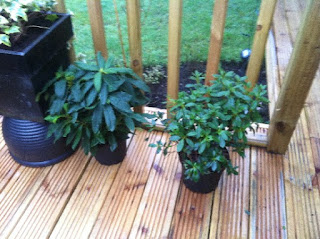 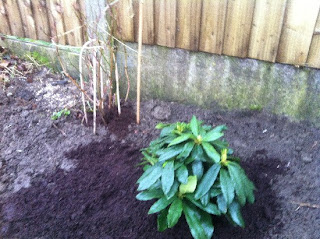 I'm afraid the photos have come out a little blurry, well, I never claimed to be a good photographer! 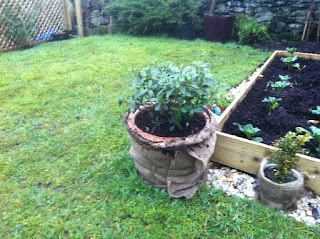 I transplanted (yet again) the laurel I bought a year ago. I hope he survives this second move. It is a lesson in not buying things when you have made no gardening decisions. I first placed him where the deck now stands and then I put him out of the way at the bottom. I have now decided that when I get a greenhouse at some point it will go slap bang in the middle of where this poor laurel has been positioned. So now he is proudly at the back and I have promised not to move him again if he promises to survive. 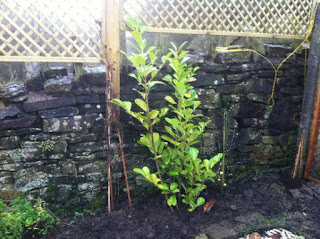 I forgot to mention the new winter flowering jasmine that is on the right of the laurel there. 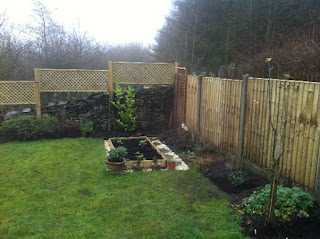 So here is the upper garden how it stands in the foggy wintery weather. It is still attractive, but very very dormant. I find this time of year to be full of possibilities in the garden and in that way it is exciting.
Posted by DH at 03:23

Email ThisBlogThis!Share to TwitterShare to FacebookShare to Pinterest
Labels: gardening.