It's been an extraordinarily busy week, hence my lack of posts. I won't bore you with all the mundane stuff, but it has been a full but very good week.

So as a result I was a few days late bottling my Christmas pudding vodka. Oh well, a few extra days steeping can't hurt.

So the unpromising brown liquid, still has a rather unpromising look, but in actual fact it is absolutely delicious! Very Christmassy and very tasty indeed.

I have 2 bottles for presents and a small half bottle for ME. 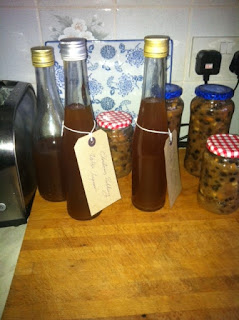 I will decorate the bottles somehow before Christmas, to make it look as good as it tastes.

As promised, with the steeped fruit residue, I made Chirstmas Mincemeat, to use as filling for all my mince pies and anything else I can think of.

All the steeped fruit went in, with some soft brown sugar, suet, orange and lemon juice (I had this frozen already from when I used the zest for the vodka), some almonds, spices and a chopped up bramley apple. I then had this on high in the slow cooker for an hour, then on low for 2 hours, stirring every half hour or so. When it was finished I left it to go cold in the slow cooker and then added a couple of tablespoons of rum. This went into 4 sterilised jars, 2 large and 2 regular. 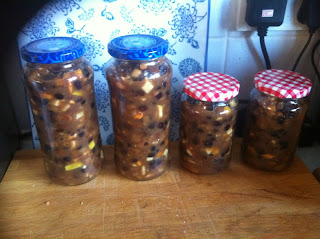 It smells wonderful (OK, it tastes wonderful, couldn't resist a little taste). I now HAVE to perfect my pastry to make the most of this mincemeat in my mince pies. I have had some good tips from all of you, in your comments for the last few posts, so I will be making use of those, thank you all.
Posted by DH at 11:35