This weekend I agreed to look after my friends 2 dogs. Remember the puppies I helped deliver (when I say helped, I mean I made cups of tea while other people did 'stuff') well they are all long gone to good new homes, except one. So I had mum and daughter to stay with me in 5 star chez Dan luxury.

How does anyone get anything done when they have a dog?

Now I accept that one of them is very young and curious and the other one is probably home sick, but the two of them follow me every single second of every single hour. I went to make a cup of tea and they stick to me like extra shadows; go to the loo with an audience. It is very endearing and they are both beautiful, but it did sort of hamper my progress. I gave up on taking advantage of the surprisingly good weather yesterday by doing some weeding. No way was that going to happen, first one of them took my trowel (thought it was some weird stick I think) while the other one did a poo and tried to eat it.

So we came inside and decided to watch a film. The dogs wanted to watch 'the incredible journey' but instead we watched the harrowing and tear jerking 1996 film version of The Crucible. We all enjoyed it and cried a bit. 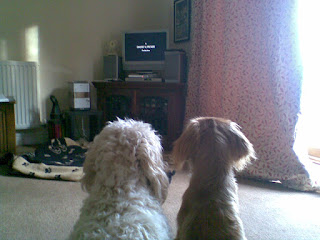 This morning I awoke with a dogs bum in my face and another one scratching over my mouth. We had a lovely bracing walk (good weather gone) at 6.30 this morning and I washed my bedding, the washing machine being a source of endless interest for my two new furry canine friends. I shut them in while I put the washing on the line and they steamed up the glass with their nose pressed against the door, watching my every move. The only time they settle is when I sit down, although even that is a little hampered by the fact that they both want to sit on my knee at the same time. Finally, we are now settled on the sofa, we may watch another film.... 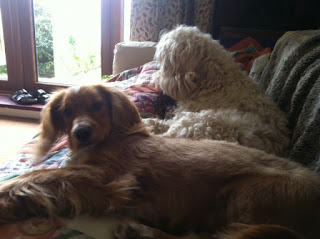