I am Nigella, yes, honestly I am.

As you know I have taken a leaf out of Penny Wise's book and am making my own Christmas cake this year, as frugal as possible out of as many 'value' ingredients as is possible. Last week I soaked a kilo of mixed dried fruit in brandy and yesterday I went onto stage 2: the cooking.
I used a mixture of various different recipes and my own spin, but basically it is the recipe for Christmas cake from Nigella's Christmas. I mainly chose this one, because she has 3 different lots of ingredients quantities for you to choose from, depending on the size of cake (and cake tin) you want. 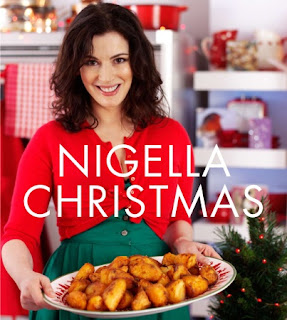 I had a 23cm cake tin, so chose the medium size.
Also I can, of course, drift around the kitchen looking fabulous, just like Nigella, never making any mess, not a splatter of cake mixture anywhere, whilst drinking a watermelon liquor and Cointreau martini  and smiling sexily into a mirror - obviously! Oops, there are mites in my plain flour. I bet Nigella never found mites in her plain flour. Don't worry, no one will notice.

I won't write the recipe down, unless anyone is interested in making the same one, because there are hundreds out there to choose from.

So finding out that the oven had to be on for nearly 3 hours, I decided to make use of all that time by filling it with as many different things as I could get in over that time period.

So first of all, a banana loaf, I lost my first recipe so had to find another one, not sure it was quite cooked enough, needing a slightly higher heat than the Christmas cake, but I still enjoyed it. I am sure Nigella never had that problem (she probably has 2 ovens - at least). 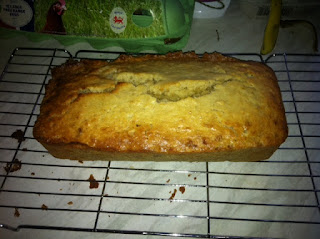 My presentation is not quite Nigella either.

The next thing I got started on was my stew, or to be more accurate 1st Man's Stew. I recommend this highly as it was SO delicious, I was in heaven, eating stew and home made bread, while watching Midsommer Murders (does Nigella have time to watch TV? All that drifting around looking sexy is very time-consuming).
I didn't quite stick to the original recipe, meat-wise, because I made use of what I had in the freezer so mine was made with nice, cheap pork belly and some chunks of chorizo. Also when I went to ASDA, they didn't sell dried cannellini beans (odd, I know) so I used tinned, which was maybe quite a good idea actually as I was doing mine in the oven in a couple of hours rather than in a slow cooker. Incidentally in ASDA, small cans of cannellini beans are 64p unless you go searching in the Indian food section, where the exact same thing, but in a large can are 37p. Get your head around that one? 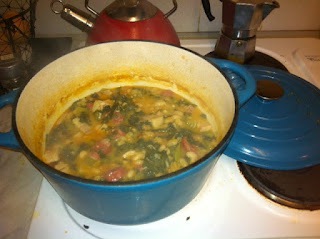 I got it started off in a cooking pot and then transferred it to the oven for a couple of hours. Just enough time for another 3 watermelon liquor and Cointreau martini's.
Wow, it really was delicious and there should easily have been enough for 4 portions. Sadly, I am very greedy and I ate two portions in one go. Ah well, it will make me more curvaceous and sexy, I am sure. 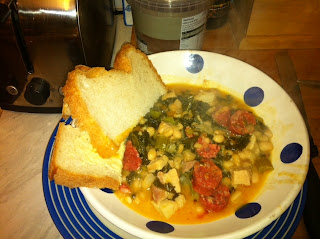 The final thing to go in the oven was a small gammon joint, I love these, you can have them cold for days and as they are only £4 they are much cheaper than buying sliced ham (I cut it in nice thick slices too). 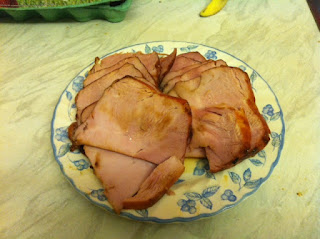 So finally, the kitchen is full of the most wonderful aroma of spices as the time draws near for the cake to come out. At this point I should have been half drunk from all those martinis if I had really been drinking them and in an immaculate kitchen. Never mind, I had a delicious glass of water instead. The sweat is pouring off me and the kitchen is a horrendous pile of used bowls, utensils, tins and trays with globules of cake batter spattering everything. Don't worry, the TV crew can wash all of that up later.

The moment of truth: 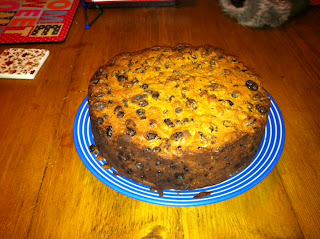