Thank you to those yesterday who helped me to identify the tree. Here is some trivia about it that you may or may not know - new to me anyway, but those who new the tree may know this. The Berberis is originally from South America and the berries it produces in Autumn are edible and make a very nice jam apparently. Anyone tried this? Full of vitamin C it seems.

I have company today, a very good friend is coming over from Cheshire to see where I am living and to have lunch (which is lucky because I have to stay in for a delivery today as well). Now I don't think I have spent very much at all on food this month, I had a lot in the store cupboard and have just topped up on basics now and again, probably about £20. Having said that I have spent excessively on gardening stuff, which is fine, but it has been done with a certain amount of gay abandon. I just feel that I have no idea what I have spent and I need to very much get back on track before I decline into overdraft. So with that in mind, yesterday I set about cooking. I didn't particularly wish to get the car out and go to the delightful Rochdale supermarkets so I took the 20 minute walk to the co-op instead. My co-op is a very expensive shop! There are rarely any bargains to be had (although I did pick up a couple of little gem lettuces for 49p) and so I shelved my original plan of making a Thai green chicken (or prawn) curry because the chicken and the prawns were just too expensive in there. Instead I opted for using up the rather large amount of eggs I had nearing their use by date and to utilise the fact that the oven would be on by filling it to capacity and beyond. So £5 was spent on a piece of gammon that was over a kilo (apparently half price but I know that a piece like that was never really £10 to begin with - they are such cheaters). Still, not a bad price for a large piece.

Now before I start on the food, I would like to just point out that my photography does tend to make anything like deeply unattractive, the camera on my phone gives most things a slightly orange tint that makes the food look rather ghastly. I promise you, it looks better in reality.

So last night, first I made an apple cake to use up 3 rather sad looking apples and 2 of the eggs. 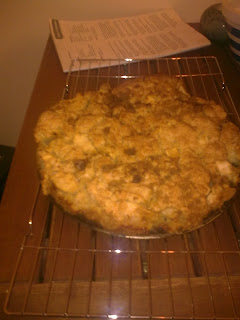 and then I made a banana loaf to use up another couple of eggs and 2 black bananas. Sampled 2 slices. 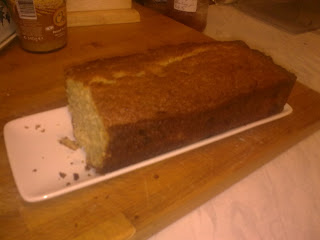 Third was the tortilla which used the remaining 4 eggs up and some old potatoes. Instead of frying the potatoes (a job I hate) I actually just oiled them and put them in the oven to roast as it was on and then transferred them to the frying pan when they were done. Made life much simpler and no real difference to the end result. 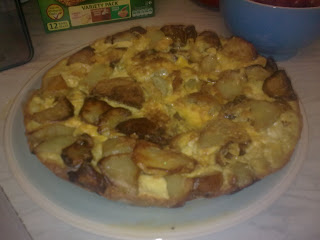 and lastly was my gammon, which I boiled first and then I blackened in the oven with a honey and mustard glaze. 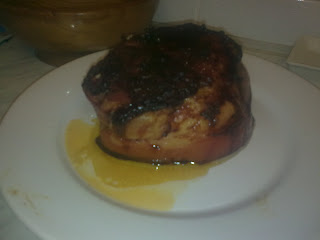 Along with a salad and some fresh bread which is cooking now, I think that all of this will provide us with a nice lunch and will leave me with great leftovers for the next few days.
Posted by DH at 00:33