The resilience of plants

Earlier this month I cleaned out my greenhouse because I had found some fungus growing on old tomato plants, I cleared everything up and then I let off a sulpher bomb (which gets right up your nose if you don't leave the greenhouse quickly enough after letting it off) which effectively smoked everything in there and should have killed off all that fungus.

It was only as I was putting everything back in and sorting it all out that I discovered, hidden under a bench 4 pots of three hyacinths each. A year ago I forced these and they gave me a beautiful (and beautifully scented) display for a few weeks over winter. When they were finished I put them in the greenhouse under a bench and promptly forgot about them completely. So it came as a complete surprise to me to find that they were growing again considering that I had not given them a drop of water for a whole year (yes I am very ashamed) and they had been fumigated by sulpher.

I promptly gave them a bit of a drink and brought them inside. Two in one of the pots did succumb but all the others are still growing and one is, dare I say it, really thriving! 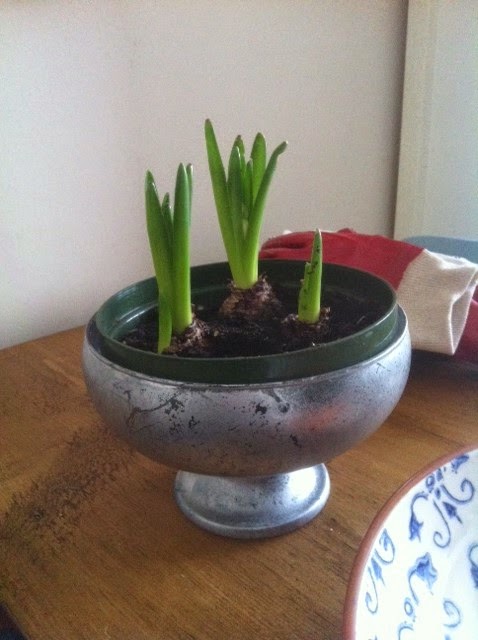 I have no doubt that the majority of the bulbs will actually flower as three of the pots are nearly as far along as this pot!

It just goes to show that a plant can thrive when all the odds are stacked against it and I can't help but be slightly proud of them.
Posted by DH at 01:45