I have been working so much in the garden this weekend, we have had good weather (for the most part) and I have loved working out there, although I am sore all over now from the digging. As I have said before I have very stony soil and it takes hours to create over even a small new bed and remove all the stones and rocks out of it, but once those stones are out, they are out forever.

For those that haven't seen the garden as it was when I moved in here are a couple of photos from back then. 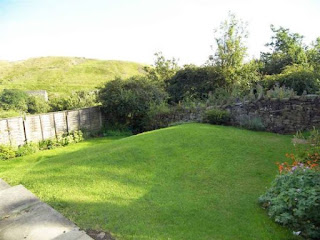 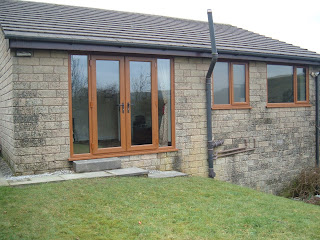 I spent a few months messing about with ideas and drawing lots of plans for what I actually wanted. I needed to preserve the flats part of the garden as much as possible to utilise the space for planting and at the same time I wanted to get the most of the sloped area which is very difficult to work with.

So at last having finalised the plan I put it into action and developed the first stage of the garden, ie, the construction part.

I put in the deck which I am delighted with. I didn't want to lose any of the wonderful view, but I did want to gain some privacy from neighbours and gain a large area to sit in and to have a lot of pots of flowers and vegetables. 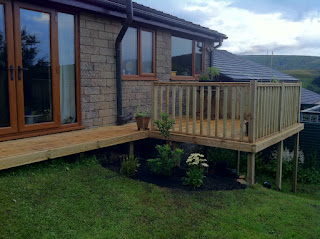 The large area is 3 m2 and so there is plenty of room for seating and a table up there. Also underneath is a lot of room for future storage, maybe even a wood store when I finally get a wood burning stove.

Now at the other end of the garden I wanted to split it into two 'rooms' The flat part has been preserved and trellises have been erected at the top of the slope. More trellises are now installed above the wall to gain me privacy from the dog walkers who could see straight into my living room before but I can still see the lovely dry stone wall. 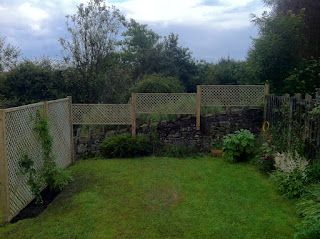 At the moment it looks a bit plain and stark but I am seeing them in the future covered in climbing plants. Today I put in a jasmine and a honeysuckle (seen on the left there) and when I have the energy to dig the next 6 feet  in front of the farther trellis I will plant some other climbers. 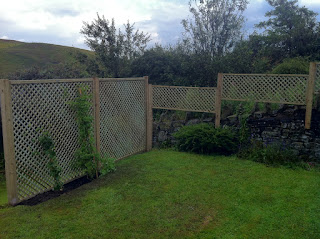 I will have another smaller seating area here eventually for sitting on windier days (it can be a very windy garden because it is up on the hill) and it will be surrounded with flower and vegetable beds eventually. 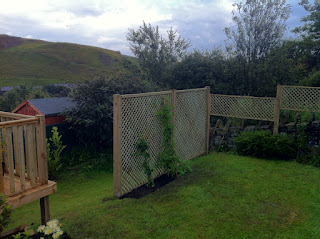 In time I am planning to put a rose arch between the edge of the deck and the beginning of the trellis with a rambling rose climbing over through summer. 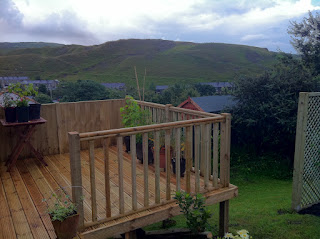 I still have the lower end of the garden to work on in a future summer. I think some raised beds and fruit tress. 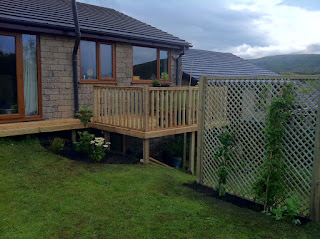 In front of the deck I planted (next to the daisies) an azalea. I have acid soil according to my soil test and I added a load of ericacious compost so fingers crossed the plant will be very happy, I love azaleas and will enjoy looking out on this when it is in flower. 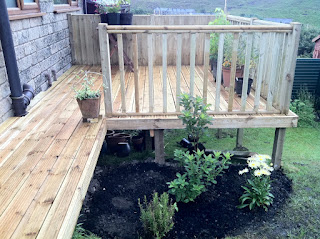 So now I look forward to putting more beds in and getting closer to the garden I have planned for. I want much less lawn and more flowers.