Today has been a big gardening day for me. I am going away with work soon and I wanted to get as much done as I could before I left. Started out mowing all the lawns - very satisfying - and then I got down to making somewhere to get some veg in. I dug out the area around the new apple tree and the rhubarb, not necessarily the best place for veggies but this will be just for this year, plans for the gardens will mean this bed needed digging out anyway and the tree and the rhubarb are not going to get massive this year.

Now the problem with my garden is that, being built on a hill and near a quarry, it is full of rocks. Turning over a bed like I did this morning is back breaking work that requires hours of digging out rocks before you can progress very far. 3 hours on and I have all of them out (5 boxes full of rocks!), added in some compost and raked it all over. A job well done.

I have put in peas, onions and some new potatoes (nicola variety, which I have had before and which were delicious) It is not a particularly organised bed, I know where everything is, but it is not in neat little rows, again, that is a one year thing, I just wanted to get them in so that I can go away and leave them. 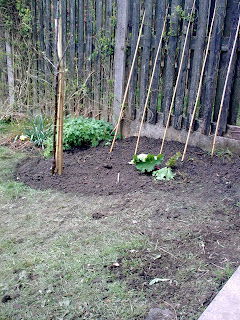 I also planted another blackcurrant in a pot this time, and some potatoes in potato bags, see how they do in there, my mum has had a lot of luck using them.

It is an absolute pleasure working outside in the garden and I could spend all day doing it (unlike my neighbours, who hate gardening so much that, at this moment they are having the entire thing decked, every last little square inch - not my kind of garden at all)

I have made a master long term plan in my own garden. At first, I wanted to give the back over to veggies, but I then realised how much I love beautiful ornamental plants as well. So I am going for a true cottage garden with a mixture of veg and ornamental, all growing in a planned haphazard way. I am going to put a couple of full size trellis up along the top of the slope at the far end of the garden which will be used for growing clematis, roses, etc and in front of that will be a patio area that will have a small table and some chairs. I decided to use the sloping part for raised beds, will be a lot of work to dig out, but will be worth it in the end I think to utilise the space. The other part of the slope will be used for fruit bushes as in the original idea. I will separate the flat garden from the sloped veg garden with the trellis and a hedge which will give me some much needed privacy from neighbours and then I will get more beds in where I can. I am lucky with a due South facing garden, so whatever I do, I never create much shade and it will always be lovely and sunny, weather allowing.
All this will take a long time to do, but I think it is best to have the plan as a starting point, then I won't make so many mistakes when I am deciding to put something in. As all of the work will be done by me, It shouldn't cost too much, which is good, as I need to put some money aside to replace the fence within the next 12 months.

I will try and scan in the plan some time and show you all.

Meanwhile, I will leave you with another couple of pictures of the puppies (see last post) 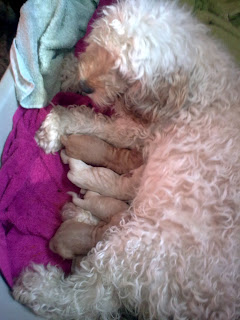 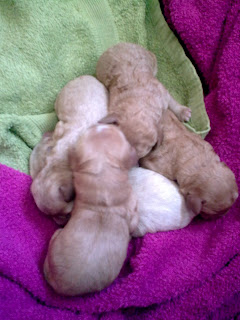