Hello dear reader, today you find me nursing a blood test hole in my left arm. I am always surprised when I get to the blood test centre at 6.45 in the morning (to avoid the horrendous queues later in the day) to find 13 people already ahead of me with the same idea as myself.
So why, you may ask, a blood test? Well about 8 weeks ago a very strange rash appeared in a very strange place - my bottom, to be precise. Now the first couple of doctors threw around such foul words as ringworm or fungal infections, which always sound rather distasteful. However I was lucky enough to find myself (after a few visits and none of the creams I had been given doing anything at all for the rash) in the presence of a really wonderful doctor who thought a little outside the box and wanted to investigate more than just the most likely cause. Well to cut a long story short it turns out that the rash was a little more serious than was first thought as it seems I had been bitten by a tic and that tic had infected me with lymes disease! For someone unfortunate enough to live in inner city London, this seems unlucky indeed, but on a working trip to Devon in late July, I was aware that there were tics about and one of these little buggers obvious decided to crawl up my leg to find a dark warm spot to have his lunch and try and kill me. 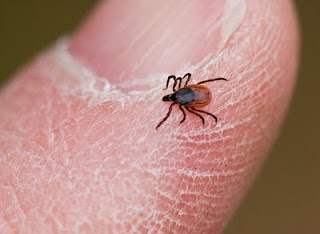 Joking aside, I feel very lucky that my doctor was on the ball, because undiagnosed lymes disease can be very nasty indeed with very long term damage. Fortunately for me I have finished a 4 week course of antibiotics and hopefully the results of this mornings blood test will reveal that I am now free of it. Let's hope.
There are more dangers than I thought living in the country, I was thinking that the worst that could happen would be an occasional sting from a nettle or accidentally stepping in a cow-pat.
Posted by DH at 00:46