What have I been up to?

The weather has been so strange, one moment raining, one moment sunny and then next snow! Last week had some beautiful days, so I got out in the garden and really got stuck in. I have completely dug the new bed now, it looks a bit of a mess, but I am thinking ahead to it being full next summer. It's the largest bed of the garden and I am carefully planning what will be going in there.
Believe it or not, I still have a £40 garden centre gift token from my 40th birthday last May, and I have been waiting for the right thing to spend it on. Now opporunity beckoned. I have put in an ornamental flowering cherry at the back of the new bed, which should be very lovely in a few years, and a couple of sweet box bushes and a couple of roses, one climbing and one floribunda. It's a start. I also have planted anenome bulbs, alliums and sown some ladies mantle (alchemilla mollis) in the border. It looks a little stark so, as always in the garden, imagination is needed. 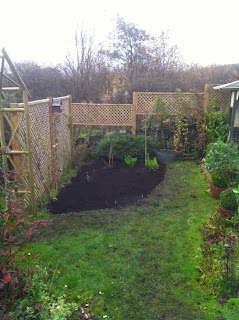 I have a 2 metre obelisk which I have to put together to go around the climbing rose at the back. It is a pink one called pink perpetué which looks like it will be lovely.

As usual I had to dig out a hundred thousand rocks - the price you pay for living up a hill near a quarry - and they are piled around the corner at the moment. I am taking them to the tip in bagfulls every time I go, except some of the big ones, which can always be useful around the garden as stepping stones, lawn edgers etc. The problem was the weight of them and so I turned my attention to freecycle. Advertised for a wheelbarrow, and within a couple of hours had been offered one from a kind couple 3 miles away. went to pick it up on Saturday morning, fantastic. I love the entire concept and freecycle! 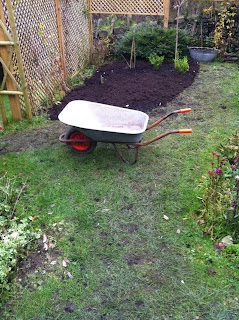 Cost me nothing except petrol and as it was a 6 mile round trip it really wasn't much.

Finally yesterday there was a massive change in the weather and I woke up to the first snow of the season. 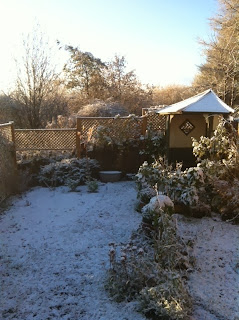 It looked magical, but I am glad to say that it has all washed away this morning.

Meanwhile plans are afoot. To say that major changes in my life are on their way is an understatement and I will be unveiling my 2014 plans soon.